Accounting, commerce and writing are commonly known to have the combined effect of giving birth to organised civilisation as we know it. Without the benefits of an advanced system of financial record keeping, modern and organised society would be simply unable to function. 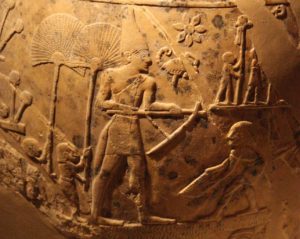 But where did the story begin? At what point in human history did we advance to the point of being able to create and record financial transactions?

Almost unsurprisingly, modern Accounting and Bookkeeping traces its first known practices to the industrious, skilled and highly organised ancient Egyptians. For it was here under the reign of King Scorpion I, during the first Dynasty of the old kingdom, 3000 BC, that there began to emerge a complex system of financial record keeping unknown to history.

It began with meticulous records detailing inventories of goods as discovered by Archaeologist Dr. Gunter Dreyer of the German Institute of Archaeology.  While excavating the 5,300 year old tomb of King Scorpion I in Abydos his team unearthed bags of oil and linen bearing individual bone tokens inscribed with detailed numerical markings.

Upon further examination it became clear that the labels recorded inventory owners, amounts, and suppliers and would be cross checked against a master ‘spreadsheet’ to avoid mistakes (a highly costly mistake for the unfortunate bookkeeper!). It is also believed these bags of goods were actually collected as taxes. It is now widely recognised that these ‘receipts’ and ‘ledgers’ constitute the ancient origin of the complex bookkeeping systems that would inevitably develop into the sophisticated accounting methods we are familiar with today.

Did writing itself evolve from bookkeeping?

Surprisingly these discoveries not only constitute the first evidence of accounting and bookkeeping but also the very first know examples of writing itself!

Interestingly this relevation also paints a picture of business, writing, financial systems and record keeping as being an intertwined phenomenon that evolved simultaneously under a complex system of government. After all, how can you conduct sophisticated business, taxation or trade without writing?

““writing emerged as an innovation because of economic necessity rather than from creative expressions of mankind” – Dr. Gunter Dreyer

The importance of scribes

We now know that Ancient Egyptian scribes were widely employed to keep and maintain meticulous inventory of the goods owned and stored by the first Pharaohs, many of which were taxes. The existence of papyrus was a clear assistant in this early bookkeeping, but bone and clay tablets were also used for permanency, with much of the papyrus lost to history. 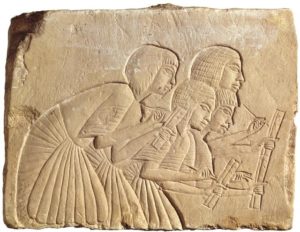 The Egyptian scribes shown above are among the earliest known bookkeepers and indeed writers. On top of learning history and poetry they would also be tasked with various administrative activities and information collection such as knowing how many rations a soldier needed and how many bricks would be required for a building.

The origins of tax

Not only did these numerical pioneers of antiquity develop the origins of bookkeeping, payroll and inventory management but were also among the first known creators of the taxation system.

Records from the time indicate that early Pharaoh’s would conduct biannual tours of the kingdom to collect and record taxes alongside a team of scribes and tax collectors. These taxes mostly came in the form of grain from farmers at rate of approximately 20% of the subject’s total ‘income’ as well as other goods such as linen and oil . Not too bad considering today’s income tax brackets!

The Reckon Roadshow rolls through its final stop for 2016 Tips for Staying Productive When Working From Home

The difference between a business loan and a line of credit

Easy SEO mistakes and how to avoid them

The habits of unsuccessful people – what can you learn from them?